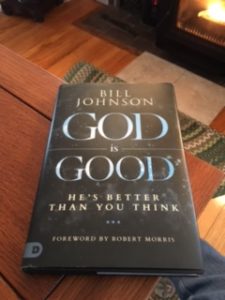 I received this book by Pastor Bill Johnson for Christmas from my daughter and son in law. Wow do they know me! I had mentioned wanting to purchase this so they saved me some money.  Thank you! This book so far has been a huge blessing and so true to God’s word. I would encourage anyone to get a copy and prayerfully read it. The theme is how good God actually is and it will probably challenge some of your beliefs or paradigms. Below is excerpt from page 40 that just blew me away!

Tragically, many forgeries are accepted by believers day after day and then sold to others in the Christian marketplace as authentic revelations of the will of God. They in turn distort the revealed will of God throughout the scriptures, perverting our sense of what He is like. The biggest forgery of all might be teaching that Jesus no longer heals people from sickness and delivers them from torment. Simple examination of Scripture proves that such a concept is a devilish misrepresentation of the One who gave Himself to reveal the Father and redeem humanity. Many good people believe such lies. They must be treated with kindness – they were poisoned with a lie. But equally true that the lies they promote must be exposed as forgeries. What causes me the most grief is that this way of thinking misrepresents the nature of God. It hurts our approach to life, seriously damaging our ability to represent Him as good. Perhaps it’s these forgeries that have been marketed for decades by well-meaning believers that have contributed to the single greatest vacuum in humans consciousness – the  knowledge of the goodness of God.     – Bill Johnson Page 40 of God is Good

I confess that this was me for years and that I promoted a pious self righteous faith that just took me back to a works based system of religion. This book affirms through scripture my identity in Christ and that I no longer have live under a system of legalistic tradition based religion. What freedom this is once you realize the lie ! My wife Connie calls this shaking off the “Fundy dust” (nick name for fundamentalism).  Again I highly recommend this book to any Christian who has ever questioned or doubted the goodness of God. Be honest we all have!

"So lift me up and lead me out, and we will run away together – to Your cloud filled chamber!" Song of Songs 1:4